This is where it all started, way back in the mists of time... The Canadian Red Cross Memorial Hospital, where I was born.

This is actually a postcard of the hospital my mother bought as a souvenir in the hospital shop during one of her stays. My brother and sister were both born here too. It was the main maternity hospital for the Maidenhead area from 1947 until it closed in 1985 on completion of the new, more modern maternity facility at Wexham Park - where my son Sam was later born.

(to see how this building looked in more recent years - and to find out more, check out my photos and mini-tour on CRXploration)

ME THRU THE YEARS... Here's me in the back garden of our house aged 2 - I love that slightly frowny face! And here I am, aged 3, on the beach at sun-kissed Bognor! My father in particular enjoyed coming here, and we'd often visit in those days. I can still remember wearing these clothes - my t-shirt here has a sailor's insignia, which was very appropriate! With my parents at Leopold Park, Ostend, Belgium, by the famous flower clock. This was the year I started school (don't I look smart in my St. Joseph's blazer!). This is the first holiday overseas I can really remember... before the age of 5 it's understandably a bit more hazy. I really loved Ostend and would love to go back one day - the beach there is amazing. This is me aged 7 (with my big brother Maurice) in a St Joseph's School photo. Check out those dimples! Most pupils got their own separate photos but, as I guess we were so close in age, we'd get two for the price of one for our mugshot! Here we have (left to right) my nan (Reva), Maurice, my younger sister Diana and myself pictured during a week's holiday in the Isle of Wight. I'm now 8 years' old! We actually stayed at a caravan park in Sandown, and my mum hired a car for the week to travel around the island.

In 2006, Sam and myself revisited this very spot! We had a very enjoyable week's holiday in the Isle of Wight (my first since this photo), and it was wonderful seeing this well again, which I found was situated behind the Isle of Wight's oldest building - the Tudor House which houses the waxwork Brading Experience. It amazed me how little had changed here - and how much I remembered from my previous visit! We've been back many times since - but sadly the Brading Experience closed in 2009. Here's the three of us again (looking a little bit older), posing with some of our Christmas presents. I think I'm about 12 here. I have a new digital watch (very hi-tech for the time) and calendar, and Maurice a Kermit the Frog toy and a chest-expander! One of Diana's presents was the legendary 'Operation' board game. To the left you can see the cage of Timmy the budgie - he was with us from 1977 to 1991, and always had an 'open-cage policy' - so he always was free to spread his wings and fly around the room! Here I am a little older still with Diana, aged 14. We're sitting on top of the Bowder Stone at Buttermere, near Keswick, which we visited during a 1980s holiday in the Lake District. We all loved the Lakes and had several family holidays there through the years - mostly at a cottage we rented for the week at Threlkeld, also near Keswick. And here's me all grown up now at the age of 18! I'm sitting (with Maurice) on the beach at Goring-by-Sea, where we used to make an annual day-trip during the summer with the family. And here's me back in the days when I wanted (and had) BIG hair!

This was actually taken the day I arrived at my hotel room in sunny San Antonio, Ibiza, aged 20, on a 2-week holiday with Maurice, Jon and Mark. Here I am with yet another (much shorter) hairstyle. This is a passport photo from when I was 24, and you could still have the 'curtain' background in your pic. As passport photos go, I don't actually think it's too bad! I certainly used to love this black polka-dot shirt - it was a mainstay of my wardrobe for years. And here I am in 1995 with baby Sam - when I became a very proud father. I'd also bought that 'Raiders' baseball cap at a very rainy (and muddy) Reading Festival in 1992, just before I met his mum Marie. Here I'm pictured with Sam a little bigger, aged 2. This was taken by Marie during our little holiday in Bigbury, Devon, in May 1997. We rented a caravan on a holiday park, which is where we're sitting here! During our stay we visited the lovely and historic Burgh Island (which was just a short distance away from where we were staying), and it was good to explore this area of Devon. This photo dates from June 2000, and shows me (in my Maidenhead Utd replica top) sat in the home dressing-room at Wembley Stadium. Myself and Maurice had travelled up there for the afternoon for a full stadium tour - I was keen to go before they started demolishing it... which I think began the following year. It was very interesting walking round and going behind the scenes - we also got to walk up those famous steps to the Royal Box and touch the FA Cup! (The only time someone in a Maidenhead shirt ever will probably!). Here I am with my wonderful girlfriend Miranda Oliver in January 2007, standing by the river Avon in Stratford (with the Tramway Bridge behind us). This was just prior to us attending a musical performance of 'The Merry Wives of Windsor' at the RSC, which is just a few yards away from where we're standing here. Miranda's parents had given her the tickets as a surprise Christmas present! We really enjoyed the show, which starred Judi Dench, Simon Callow and Alistair McGowan. It was also my first ever visit to the RSC! We'd been seeing each other since September 2006 - and would later get married in 2019. Here I am in July 2014, on a sunny London pub walk around Spitalfields with Miranda. We love our pub walks around the capital, and this one was especially interesting as my ancestors on my mother's side were Huguenots who settled in this area in the 17th century (more info on my In the beginning... page). Behind me is the historic 'Gun' pub, which was one of a few we visited that day! Sadly it was demolished a year or two later, but happily a new 'Gun' pub rose from the ashes not long after - albeit in a slightly different location nearby (on the ground floor of the new London Fruit and Wool exchange development). 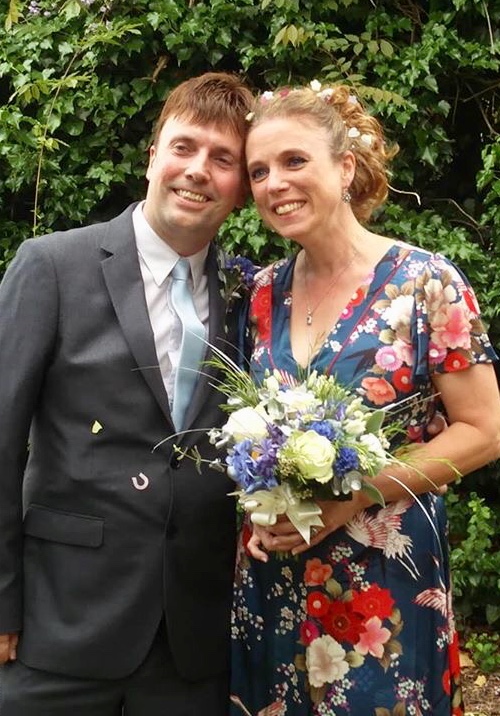 Here's a very happy-looking Miranda and I on our wedding day, back in May 2019! We're outside Maidenhead Registry Office, where the ceremony had just taken place - and we were so pleased to be joined by so many family and friends. We had such a lovely day, and everyone was so kind and generous with their gifts - we were really overwhelmed, and it all contributed to making this day so extra-special for us. Following the ceremony, ourselves and our guests went for a reception at the nearby Rose pub in Maidenhead town centre. A special mention too to my son Sam, who was my Best Man on the day. He did such a brilliant job with our guests, not to mention doing an excellent speech. We certainly had a day we will never forget!