Here's a FUN photo gallery of Sam depicting each year of his CHILDHOOd... I remember this so well... I laid him on his tummy on my bed - and to my surprise he held his head up and made such a startled face! So I rushed downstairs and grabbed my camera. This was in the days before he had even learnt to crawl!

I think it made for a lovely photo. This was taken at Camber Sands in September 1996, and this holiday was the first time Sam got to really play on the beach! I remember we had a very sunny week. I loved this picture so much that at Christmas that year we created a laminated calendar featuring this photo to send out to friends and family. I thought he looked very grown-up, considering he was still only 1 year's old! Here he is in the back garden with his Teletubby Dipsy.

These toys were especially hard to obtain as Teletubby fever swept the nation that year... so he was fortunate to get one so soon!

I really loved this picture, and for his 3rd birthday his mum Marie created a birthday card with this photo at the centre, which we sent up to CBBC... and it was shown on the screen by presenter Dominic Wood with other children's photo-cards, just prior to that day's edition of the Teletubbies - before an audience of millions, no doubt...! It was a very proud moment, and really cool to see Sam on the telly. Here's Sam with his Gromit jumper! He was a big fan of Wallace and Gromit at the time, and would watch the three W&G films over and over, and even recite some of the dialogue. My mother spotted this jumper (which someone had knitted) on sale at the café of our local park where he used to play, and thought it was perfect for him.

Funnily enough, Sam's head was later 'extricated' from this photo(!) to be scanned onto an animated video I gave him for his 4th birthday entitled 'UR the Star' - put together by a company who make little personalized films as presents. Sam was by now attending Birdwood Nursery, Maidenhead, full-time - and this was the photo taken when a professional photographer visited to snap all the children. It was actually the same nursery I attended myself... many aeons before, so it was nice he could follow in my footsteps as it were. This is Sam's official school photo for his first year at Boyne Hill Infants' School, Maidenhead. I kept this photo on my keyring for years and years, and it was still there when he was an adult! I think he looks very smart in his uniform - and what a lovely smile. Sam's getting a bit older now... this was taken at Carters Steam Fair, on Holyport village green, where it pitches up each summer. He's standing by the trailer that is full of old-style penny arcade slot machines - which we all had great fun trying out! I thought this photo was very natural, and I liked the bright colours of the fair around him. He's also wearing his Action Man t-shirt - he was a big Action Man fan at the time - just as I'd been as a young boy too. This is Sam in his Harrowby School uniform, on the day of the Queen's Golden Jubilee celebrations. His class performed a song that their teacher had written especially for the occasion, and performed it live in front of the BBC cameras at Boultham Park, Lincoln!

The crowd all joined in later for a finale of  'All You Need is Love'... the lyrics of which were helpfully printed on the reverse of these balloons, as demonstrated here by Sam!  It was great too seeing him on stage doing his stuff - and I was to see him onstage more and more as he grew older. Again this is a professional photo, taken at the Windsor 'Old Portraits' studio near the castle when we took our annual boat trip from Maidenhead with my mum one summer's day in 2003. We both got dressed up for a photo, and then they also took this separate one of Sam which I thought was quite charming, and would be perfect to use here. Sam by one of the Lutyens fountains in Trafalgar Square, which he also paddled in later! This was during the summer of 2004, and just out of shot (apart from Nelson's column) is a giant prop of Thunderbird 3 that was used for the movie which was currently on release. There were lots of children playing in the water that day, and a real holiday atmosphere. And of course Sam's now wearing his glasses, as he seems to have inherited mine (and my dad's) short-sightedness! Here we are, back at Carters Steam Fair - this time at Pinkney's Green, Maidenhead, in early May 2005. Sam is posing with a sword he won on one of the sideshows - we did this photo especially to put on the site. Here's Sam, showing off his trophies for finishing as top player in the regional Yu-Gi-Oh tournament (held in Edgware) in March 2006! Winning this tournament qualified him for the National Championships in Birmingham in May, which he later attended. Sam was surprised and delighted to win and, with some tough opponents, it was no mean feat. He attended a local Yu-Gi-Oh tournament in Slough at this time (see Sam Stuff), where he had been honing his skills as a player since 2004. The ring-binder propped up beside him contains hundreds of his Yu-Gi-Oh cards - slotted into specially-made transparent plastic sleeves.

Also notice the 'Down Under' T-shirt he's wearing - this was a present from my brother (Sam's Uncle Maurice) from his latest trip to Australia during Feb/March 2006. Here's Sam during our Isle of Wight holiday in July 2007. He's wearing his Reading FC replica football shirt - they'd just finished their remarkable first season in the Premiership (finishing 8th position). On the reverse of the shirt are his name and number... his number being his age - 12! We had this shirt specially made up at the beginning of that famous season.

This was our second summer holiday visit to the Isle of Wight running - we stayed in Sandown once more (as in 2006), but this time Miranda joined us too. One of Sam's favourite things from our first visit was the chair-lift ride at The Needles, which transports visitors down the coloured chalk cliffs to Alum Bay (where Sam's sat above) and back up again... if they so wish! I must say I didn't quite share Sam's enthusiasm for this transportation - I don't like heights and I found it all rather scary! But, a bit like a scary rollercoaster, it somehow just makes you want to go back and do it all over again and repeat the experience - so that's what we did! But definitely not for the faint-hearted...

Just to Sam's right (above the jetty) you can see the Needles rocks themselves, and you may just be able to make out the lighthouse at the end. We later walked along the cliffs round there to the Needles Battery, and saw it up close - it was another lovely sunny day & a great holiday. Here's Sam (with a rather severe buzzcut!) up on the ramparts of Pembroke Castle, taken during our visit there whilst on a week's holiday in Tenby with Miranda in July 2008.

Sam said he'd like to go somewhere different after our two previous holidays in the Isle of Wight in 2006 and 2007 - so I suggested Tenby, as I hadn't been there since a family holiday when I was 9... having remembered what a lovely place it was.

We had a very enjoyable week, and even had some sunshine - as with 2007, July 2008 was rather rainy, but we were fortunate enough to avoid most of it. We had a great day out at Pembroke Castle, and Sam said he'd like the above photo to be used on my site - so here it is! Here's Sam up pictured at the amazing Thornton Force waterfalls at Ingelton, North Yorkshire. This was taken during our stay in August 2009 with Miranda at her Aunt and Uncle's house (Dorothy and Ian) in Whalley, Lancashire.

Miranda knew this area very well, as her parents were from this part of the country, and had many childhood holidays here. This was the first ever visit though to Ingleton for Sam and myself - we really enjoyed the 5-mile walk that circles the many waterfalls along the way, and the hills of the Yorkshire Dales. Sam enjoyed climbing around all the rocks that surrounded the waterfalls.

Following our walk, we finished our day at Ingleton with a visit to the White Scar caves - the longest show-cave in Britain. Again, Sam said he'd like this photo to be used on the site, so I'm happy to oblige! This was a fun picture! Here's Sam (standing in the driveway at Shirley Road) all dressed up as the White Rabbit for his friend Libby's Alice in Wonderland-themed 15th birthday party. He put this costume together with help from Miranda, and I really love the result! Sam at the highest point of Hillsborough, in Hele Bay, Ilfracombe - pictured during our summer holiday there with Miranda in 2011. We were staying nearby, just a short walk away at the lovely peaceful Hele Bay Caravan Park - and had a very enjoyable week. Just behind Sam is Beacon Point - this is where the former Beacon Point Hotel once stood, where my parents had enjoyed their honeymoon all those years ago. As I've mentioned elsewhere, the hotel sadly burnt down in 1985, and now there's no trace of it!

But it was lovely to visit this area, and see the sights my parents would have seen at such a happy time in their lives. I love Sam's Reading FC replica 'away' shirt too, complete with Waitrose sponsorship! Here's Sam by a familiar London landmark on Summer Solstice day 2012. This was during his second stint doing work experience at the Houses of Parliament - this time with MP Tobias Elwood. He'd even been to PM's Question Time the day before! During his first stint a few weeks earlier, he'd worked in the office of Home Secretary (and future PM) Theresa May. It was fascinating hearing all about his experiences here, and seeing what goes on behind closed doors. Great work Sam! 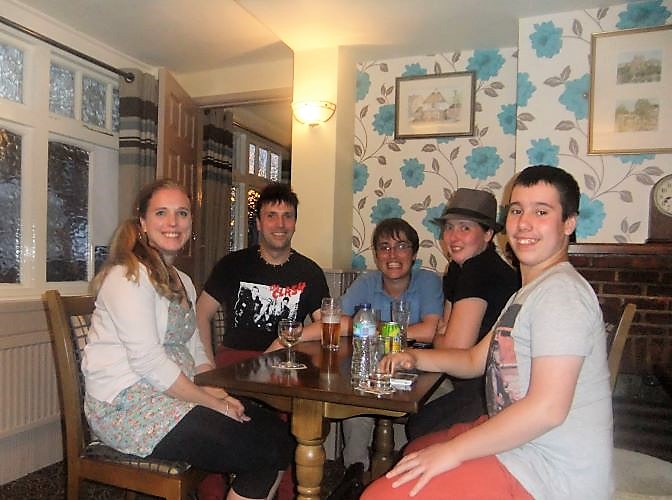 For the final pic, I've chosen a special one here featuring the whole family! Left to right: Miranda, me, Sam, Marie and Calvin. This was the August weekend when Marie and Calvin were in Maidenhead, before later leaving for their holiday in Cornwall. Sam had dinner with his mum and brother at The Bear in Maidenhead, and then after that they all came back to our apartment. We thought it would be nice to have take them for a drink at our local pub, The North Star, which is where we are here. It was so nice to see them and to have them here in Maidenhead, and it was quite an occasion! It's certainly been an eventful 18 years for Sam, and it's been fun looking back with these photos to see his journey. Let's raise a glass to Sam, and to all the special people in his life!