Here's our little New Year's Eve celebration as we see the New Year in! We always stayed up for this, and to watch Big Ben and the wonderful firework displays - and this year was no different. New Year's Eve was also Charlie's birthday - and New Year's Day my birthday. It was always so nice opening some cards once the clock struck 12, and then waking up the next day to continue my birthday celebrations. I still do this now, and it's such a lovely way to start the New Year.

Christine: "We had Charlie's birthday cake (he was very interested in that!) and gave him a gorilla toy - will give him his bone tomorrow. Sam gave Stephen his first birthday card, and we watched the beautiful firework displays from London and Edinburgh. Happy New Year - I hope it will be!" Here's Christine (in May 2005) heading to one of her favourite spots with Charlie - Ray Mill Island (a small island open to the public on the Thames in Maidenhead, which was once the private garden of the Boulter's Inn). She took him there every week - usually on a Thursday, and always said she enjoyed the peace and calm there. She'd often sit in the little café on the island and send me a text; usually to tell me how much she was enjoying the relaxation and serenity there (Boulter's Lock itself is immediately behind where she's standing in this photo, behind the balustrade of the bridge).

The following are quotes from a couple of visits she made there during May, that typify her love of the island and the birdlife/nature there...

Christine: "Took Charlie to Ray Mill Island... [went] to the café first - had our coffee and a '99', then walked round the island. Charlie searched for food as usual! He also took me down the steps again to the weir [since closed off for safety reasons]. Charlie laid down... under a willow tree with little white daisies around him - looked sweet, wish I'd had my camera. On way back saw a pair of Canada Geese with one dear little baby goose just like a fluffy ball, with its little feet paddling away nineteen to the dozen. [Later] saw Water Wagtails skimming over the water catching flies - the Cormorants are still there too."

We noticed on our numerous visits to the island that were a growing number of benches dotted around with memorial plaques attached, in remembrance of local people who had passed away. In particular, in 2005, my mum noticed a new one dedicated to the husband of a friend of hers from her Craft Circle (which she usually attended most Wednesday mornings). So, in June 2006, as a posthumous tribute to my my mum, I arranged for her to have her very own plaque placed on a bench on the island (I've added a photo of this a little further down this page). 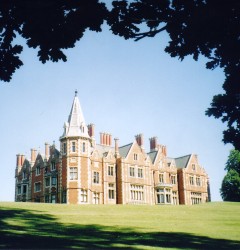 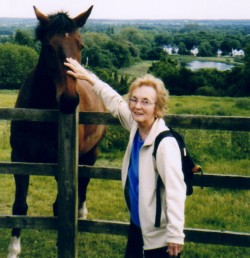 The above photos are from our very first visit to Taplow Court (on May Spring Bank Holiday 2005). It's a large stately home on high ground near Maidenhead and Cliveden (formerly belonging to the local Grenfell family), but now owned and operated as the UK headquarters of the worldwide Buddhist order Soka Gakkai. They very kindly open up the vast grounds each Sunday throughout the summer months, and it's always such lovely place to visit to escape the hustle and bustle of nearby Maidenhead.

Christine: "Went... to Taplow Court, which was open today - never been before, but always wanted to visit it. We turned into the drive and got a lovely view of the house - it belonged to the Grenfell family; later Lord and Lady Desborough, and is now owned by a Buddhist sect. We walked through the very well-kept gardens to the cafeteria where we had a drink at a table outside on the grass. Lovely weather, with lots of sunshine. After that, walked back through the gardens and then into the woods. The house [has] magnificent crystal chandeliers and carved ceilings - went upstairs to an exhibit about the First World War. It was really about the [Grenfells] eldest son, who was killed in the war - also his brother. Their sister became a Red Cross nurse - very interesting. The house [is] very high up on Berry Hill - we could see the weir and Ray Mil Island below us, and All Saints' church in the distance. Stroked a friendly horse, then found a very nice garden through a wrought-iron gate and sat there for a time (above, bottom left) - would like to go back and see some more."

Diana Silcock becomes Diana Brooks! These photos show Diana and Neil on their wedding day - June 11th, 2005. On the left is one of the pics taken just after the ceremony at Bath Guildhall - you can also see part of the huge edifice of Bath Abbey in the background.

The other pic is outside the entrance to the New Inn, Farmborough (near Wells), where the reception was held. From left to right: Mum, Neil, Charlotte, Sam and Maurice. Christine was one of the witnesses at the wedding, and it was so good she could be there for Diana's big day.

Christine: "Got up 6:30am ready for the big day! We left just after 8... got to Bath about 9:30 and found the Guildhall (Registry Office) very near the Abbey.